A Cinnamon Bun a day . . . keeps all sorrows away: Wild Apple-Cinnamon Buns

A tiny warning in advance!

The following recipe could lead to an incurable addiction:

It was time for a treat that always cuts a good figure for breakfast, a snack or while teaming up with cup of coffee (and at the same time also makes us look good ourselves).

We are always going wild  here on #brotokoll – and we make no exception with cinnamon buns. And so also in this recipe we don’t use any commercial yeast but bake us through this sweet adventure with our wild yeastwater instead (HERE you will find everything you need to know about it).

The extended dough rest in the fridge provides an awesome flavor and Tangzhong is responsible for extra fluffiness.

Same as in the recipes Blondy (the Easter Challah, leavened with Italian Pasta Madre) and Everybody’s Darling (wild yeastwater brioche), we rely once again on the award-winning brioche and croissant flour T55 Gruau Extra from Moulins Bourgeois (available at bongu.de *) – Flour Power from France.

But they shouldn’t just be “cinnamon buns.” So just imagine the well known saying in an adapted way, which disclosed the recipe’s secret: “The apple doesn’t fall far from the…bun”. Hence we will “applefy” our cinnamon buns.

That might sounds like the dessert entry in the menu of a starred restaurant – and will soon land on your table! The fluffy cinnamon rolls (buns) are filled with apples fried in olive oil, caramelized walnuts with a pinch of sea salt and of course cinnamon. 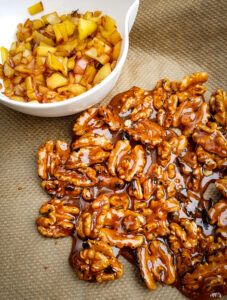 Shout it out loud and get your wild yeast ready for baking!

For even more tipps, tricks and recipes, join me in one of my upcoming workshops! Check out my #brotokoll workshops overview. For individual workshop requests (individual coaching and /or live baking via WhatsApp, Zoom & Skype) send me a message!

I have to mention at this point that this is an unsponsored blog post – however, as for transparency reasons I inform you that the * marked links are affiliate ones. The final sales price for you doesn’t change in any way! 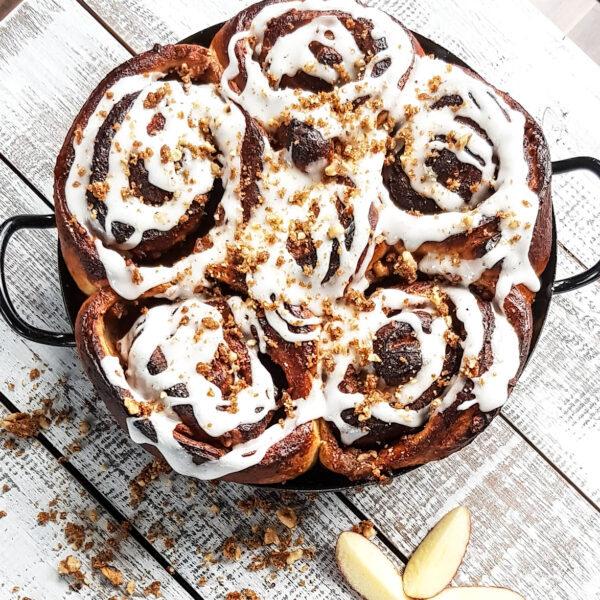 At next, mix 15g of your Yeastwater Poolish (discard the rest) with 15g of water (25 degrees Celsius) and 15g of flour and let it ferment at room temperature until it has risen a third in volume (at 25-28 degrees Celsius count with 2-3 hours). Now close the bin firmly and let it rest for 12-24 hours in the fridge.

Mix flour, water and milk in a pot until everything is dissolved, while bringing the mixture to the boil. Keep on stiring: at around 65 degrees Celsius the mixture will get thicker. At that point, remove the pot from the stove, keeping on stiring until you end up with a kind of „pudding“.

Cover the mixture with a plastic wrap (directly on it’s surface in order to avoid that it dries out) and let it cool down. Now place it in the fridge for a couple of hours (or overnight) until you gonna knead the main dough.
Main dough
180g Yeastwater-Starter
300g T55 Gruau Extra
180g Tangzhong
80g Butter
75g Refined sugar
10g Honey
80g Egg yolk
20g Oliveoil
5g Salt
1 pinch Bourbon Vanilla
1 pinch Orange- or lemon peel

For the main dough mix yeastwater-starter, Tangzhong, egg yolk, sugar, honey, Bourbon Vanilla and orange peel until the sugar is completely dissolved. Now add spoon-wise the flour and keep on kneading with your kitchen machine until you have a smooth dough. Once the dough starts to release from the sides of the bowl, add the salt. At next, add the butter piece by piece and at the end (once all the butter is incorporated) the olive oil.

Final dough temperature should not exceed 27 degrees (25 would be just perfect). At the end, let the dough relax in a greased container for 30 minutes.
Bulk proof | Stretch & Folds
Moisten the working surface with water, release the dough onto it and give it a strong round of stretch and folds. Place the dough again into the container and let it rest another 60 minutes. Repeat the stretch and folds, followed by another dough rest of 30 minutes. Now, cover it well and let it rest for 12-16 hours in the fridge (5 degrees Celsius). 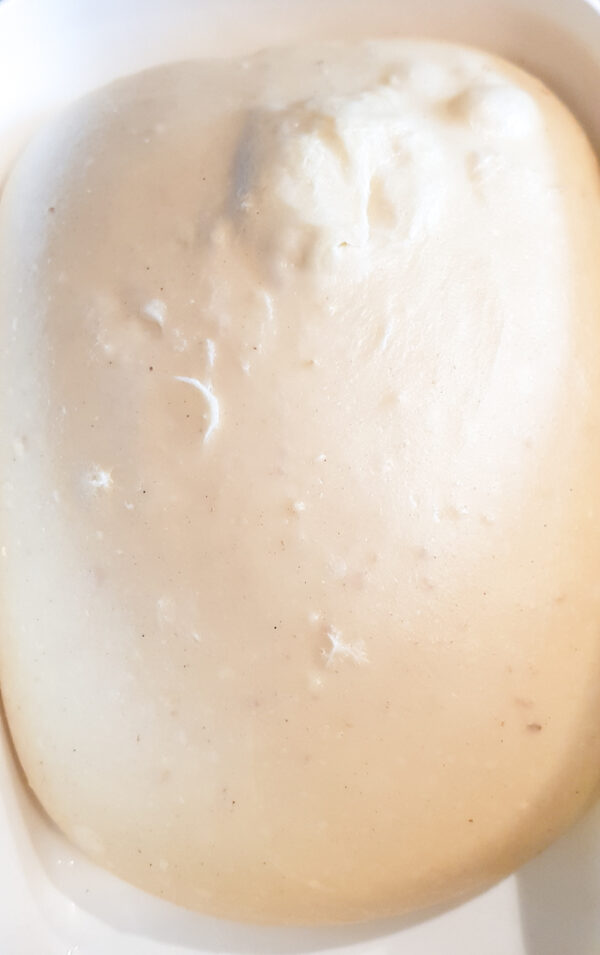 Cut the apples into small cubes and frie them with some olive oil until they get a beautiful brownish color (they should be quite soft at the end). Make sure to also let the apples cool down before using them in the following step.

Over night your main dough should have doubled in size (otherwise let it ferment at room temperature for some hours until it has reached the desired volume), Let the dough (in case it has already doubled in the fridge) acclimatize for 45 minutes (during that time prepare the walnuts and apples as described in the step above)

Flour your working surface slightly with rye flour and release the dough onto it. Now shape the dough with a rolling pin into a rectangle (with a maximum height of 0.5 cm).

Roll the dough up along the longer side. Take care and prevent the dough from tearing!

Now divide the roll into 6-7 equal pieces (your rolls or respective buns) and place them close to each other into a buttered pan (suitable for the usage in your oven).

Let the Cinnamon Buns ferment well covered until they double their volume in size and got light and airy (at a room temperature of 25-26 degrees Celsius this may take around 3 hours). 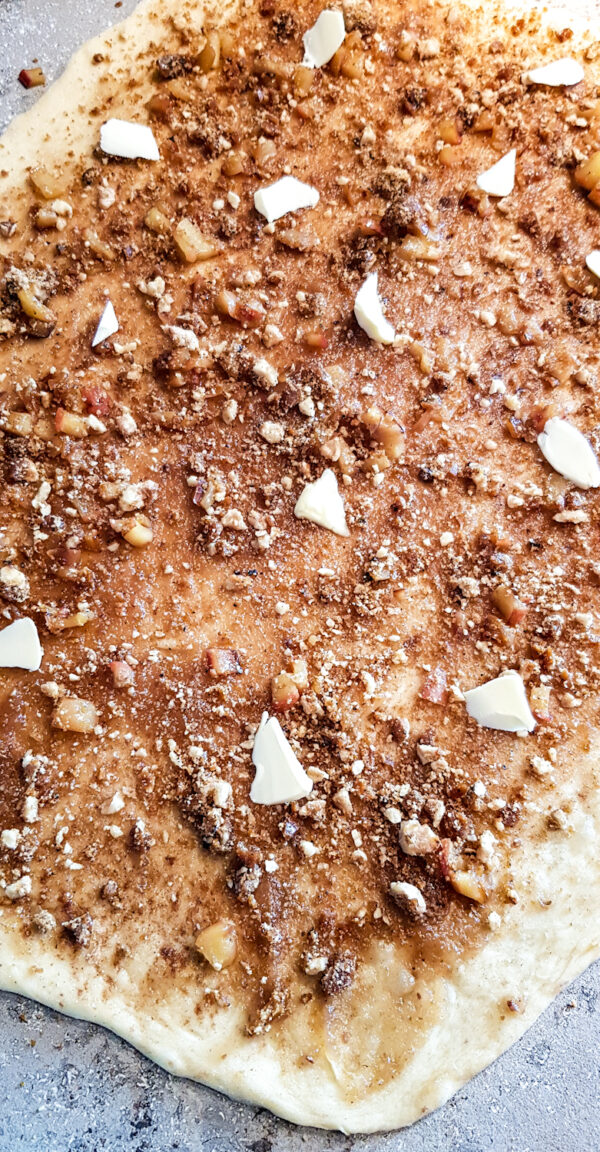 Baking
Egg yolk, some fresh cream and a pinch of sugar for egg-wash

Heat up your oven with your baking stone for an hour at 190-200 degrees Celsius. Once the Cinnamon Buns are ready, apply the egg-wash (mix the egg yolk with a pinch of sugar).

Bake the buns/rolls without steam for approximately 22 minutes (once they have a golden-brownish color they are ready). They should reach a core temperature of 95-96 degrees Celsius. Let them cool own and give them a topping they fully deserve! 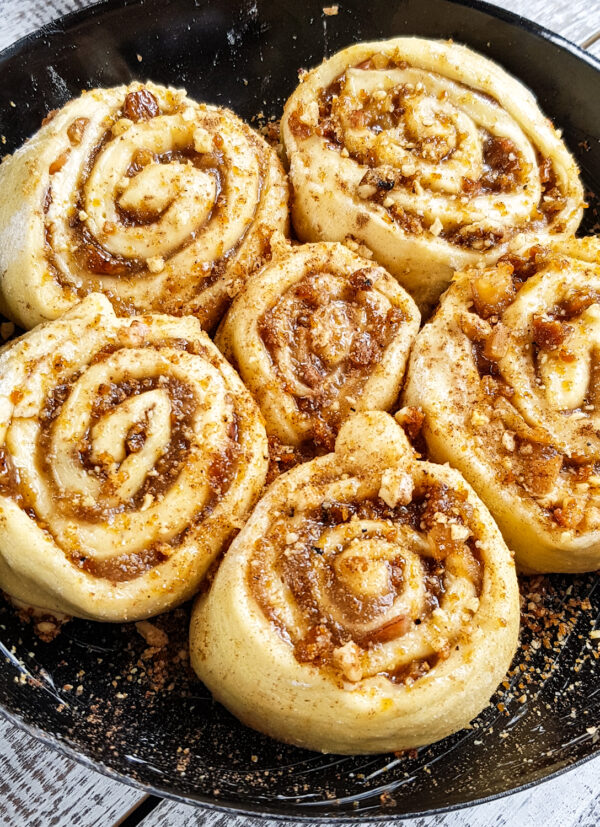 HERE is all you need to know about setting up your own wild yeastwater.

The indicated recipe quantities are for a total dough weight of 920g.

The indicated hydration does not include the egg yolks as liquid.

For a  longer lasting freshness store your Cinnamon buns within a plastic bag - and bake them again for a couple of minutes in your oven to make them crispy again.

Do you have specific questions or issues? Contact me via the contact form. I am happy to help you.

The Hybrid: Mediterranean Ciabatta without commercial yeast or doubts

The Hybrid: Mediterranean Ciabatta without commercial yeast or... 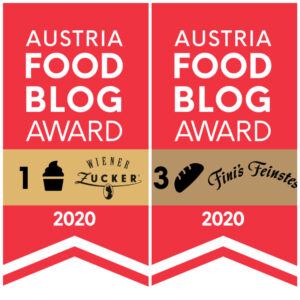 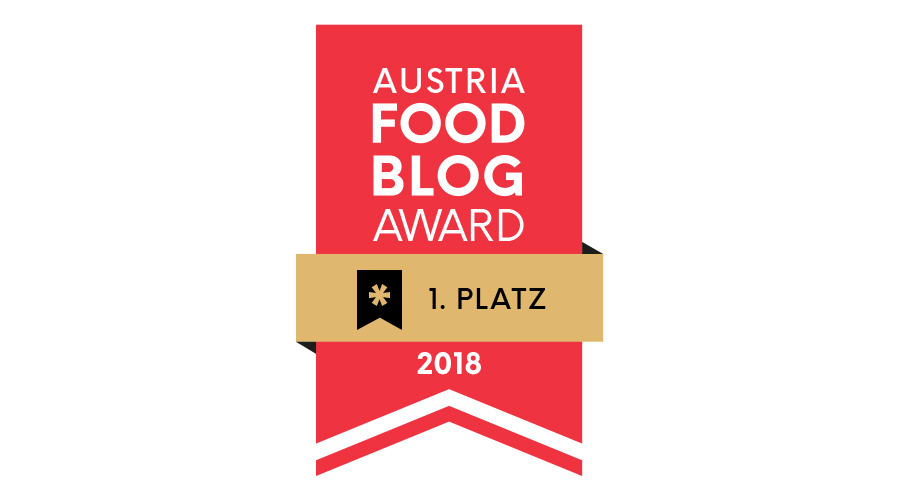 It's always the right moment for a decent #chocola